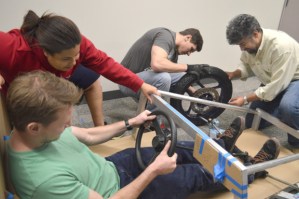 From being undesirable in a Romanian forced labor camp to a well-respected mechanical engineering technology professor, Raresh Pascali has come a long way.

Adviser, teacher and friend are all roles Pascali has had since his arrival at UH in 2005. The one trait he wants his students take away from all his lectures is self-reliance.

“I would like to give them a pocket knife and drop them in the jungle, and I would like to see them come out with a jeep,” Pascali said. “Schooling is to build self-confidence.”

Pascali said he considers himself somewhat of an underdog. He sees some of his engineering students as underdogs too, mainly because they may have something to prove either to themselves or to their families, much as he did when he first arrived in this country.