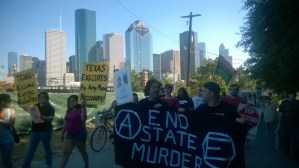 Through the busy streets of downtown, families and friends of death row prisoners shouted and chanted in unison Saturday afternoon at an anti-death-penalty march.

Participants held up signs and posters with faces of their loved ones, some of who they said had been wrongfully convicted. Others said their relatives never had a fighting chance because of their race or their income level.

All agreed that Texas’ death penalty system is broken.

“We got a system that is used against the poor, the innocent as well as the guilty. It’s used against people who are so mentally ill that they don’t even know what’s going on,” said Gloria Rubac, a Houston activist and member of the Texas Death Penalty Abolition Movement.

To date, Texas has executed 517 inmates, more than any other state in the U.S. since the re-establishment of the death penalty in 1976 after the Gregg v. Georgia case. The first man to be executed after that ruling wasCharles Brooks Jr. in 1982.