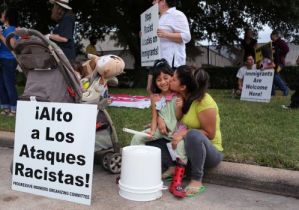 More than a dozen people chanted and beat makeshift drums outside a north Houston processing center Saturday to protest the detention of immigrants and refugee families.

“We want to make some noise and oppose the facility that is going to be opened in Dilley, Texas,” said Jorge Olvera, president of the Hispanic Student Association at the University of Houston, who came to support the protest outside Houston’s Corrections Corporations of America Houston Processing Center that was held in conjunction with a protest at the Karnes County Detention Center.

The South Texas Family Detention Center is scheduled to be built on a 50-acre site in Dilley within the next seven months. As part of a four-year agreement with Immigration and Customs Enforcement, CCA will house and be responsible for 2,400 individuals at the new facility.