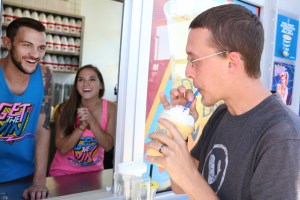 Cory Nimmer and Kelli Gillespie hiked nearly 5 miles to Chicken Point peak in Sedona, Ariz., with four friends to marry in a private ceremony three years to the date from meeting at a Dutch Bros. Coffee shop in Arizona.

Carrying only backpacks, which contained their formal wedding clothes and water, the couple read their vows to each other and said “I do” before their closest friends, one of whom presided over the wedding.

Less than a month later, the couple learned that they would be the new owners of the Dutch Bros. East Vegas store in Las Vegas. Now the couple is looking to open at least six additional shops in the valley after their first store opens today at 2820 E. Tropicana Ave.

“We hope to splash soon in the next five years,” Cory Nimmer said. “We’ll have sites from Sunset up to Nellis on the east side.”