The times…they are a changing

I resigned my position at the Garden Island on Thursday.

Here is an excerpt from my resignation letter.

“I’d like to congratulate you on succeeding where so many before you have failed. A bullet between the eyes would have been preferable to this charade. But I’ve learned to pretend over the past nine years – to pretend that my victories mattered only to realize that no one was keeping score. To realize that liars do not fear the truth if there are enough liars. That the devil is just one man with a plan but evil, true evil, is a collaboration of men which is what we have here today. If I am a guilty man, my crime is in daring to believe that the truth will out and that no one lie can live forever. I believe it still. Much as you try to bury it, the truth is out there. Greater than your lies, the truth wants to be known. You will know it. It’ll come to you, as it’s come to me faster than the speed of light.

You may believe yourselves rid of your headache now and maybe you are … but you’re only done it by cutting off your own heads.”

That’s Agent Fox Mulder to Deputy Director Kersh at the end of Season Nine of the X-Files.

I took a position with the Yakima Herald-Republic in Washington as a watchdog reporter. Exciting stuff. 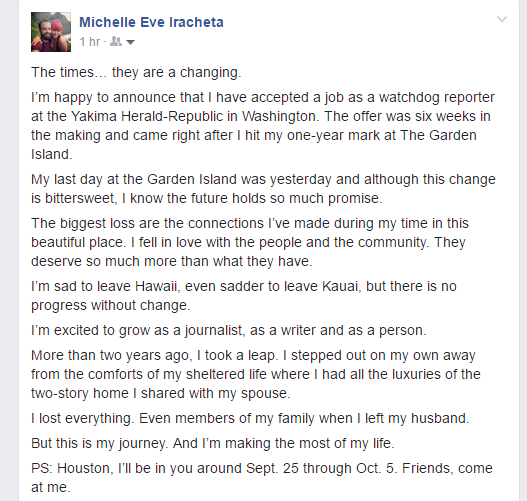 I got a support from friends around the country, but especially from a number of reporters who know the business and the reasons behind why one would choose to leave a newsroom.

Although, I didn’t provide specific reasons for why I left, an earlier blog post might give my readers some insight.

Folks over nymag.com surveyed a bunch of media professionals and asked them to critique the media.

Here’s what some of them had to say.

O In your view, the biggest problem with the media these days is (note: these overlap, but please pick your top three):

1) A broken business model that leaves journalists insufficiently funded to do good work.

2) A broken business model that causes media organizations to pander to audiences.

3) The need to entertain or sensationalize in order to keep readers interested.

4) Prioritization of speed over accuracy.

6) A tendency to ssor inflate conflict.

TIE Other. Please fill in.

8) An unwillingness or inability to hold the powerful accountable.

TIE A phony adherence to objectivity.

TIE Overreliance on anonymous sources and information that can’t be corroborated.

The write-in responses are great, too.

Here are some of my favorites.

A shift in power to platforms like Facebook that makes publishers’ traffic reliant on factors outside of their control.

I pick shallowness—on the part of both the media and the audience.

The construction of a personal media brands superseding the truth of a story.

Pandering to readers who ought to be ignored.

Preaching to the choir, to increasingly specific choirs.

A lack of connection with readers—i.e., readers feel like they were not consulted.

Lack of editors, editorial oversight, and training for young journalists in how to write and report.

But nymag.com went deeper and asked a lot more questions, too. Check out the link above if you’re curious.

Critiquing media is actually one of my favorite things to do. I took a journalism class in college at the University of Houston where that’s all we did. The class was by far one of my favorite classes. We sat and watched news from different outlets and then decoded how reporters reported the news.

We read articles from different major newspapers and then critiqued the angles, the sources and even the publishers.

I learned so much in that class.

I’ve said this before and I’ll say it again. Journalism is evolving. Journalists everywhere are at this beautiful point where we have more tools at our disposable than ever to tell stories.

Newsprint may be losing ad revenue, but publishers across the country are restructuring their organizations and newsrooms to be more digitally focused. Two sentences to go on the web when you have information. People want to have their news fast as it’s happening. They want the videos. They want the pictures. The Tweets. The Instagrams. The Snapchats.

And even then, that’s not enough.

They want to know the person who’s telling the story behind it.

Who is that reporter? Why should I trust them? Why are they important?

The idea of the abstract reporter in the age of digital and social media just doesn’t make sense. We have faces and our lives are now a part of the story.

I’m excited for my new role at the Yakima Herald-Republic, where they are excited to bring me on as a digitally focused watchdog reporter.

I’ll be leaving behind some great people in Kauai. I’ve made some great friends.

But the future is waiting. And stories are waiting to be written.

The last thing was that I finally finished rewatching The X-Files. It took more than a year.